Lake Chad Might Be Shrinking, But It Has Nothing To Do With Climate Change

Lake Chad – a source of water to millions of people in West Africa – has shrunk by nine-tenths due to climate change, population growth and irrigation. But can a scheme dating back to the 1980s save it?

“It’s a ridiculous plan and it will never happen.” That’s the reaction many people have to the idea of trying to fill up Lake Chad and restore it to its former ocean-like glory by diverting water from the Congo river system 2,400km (1,500 miles) away.

Sceptics in Nigeria, who have seen successive governments fail even to make the lights work, wonder if the region’s politicians have nodded off and have been dreaming a little too hard.

But the government ministers and engineers who were recently sipping mineral water in the capital, Abuja, at the International Conference on Lake Chad had good reason to be thinking outside the box. 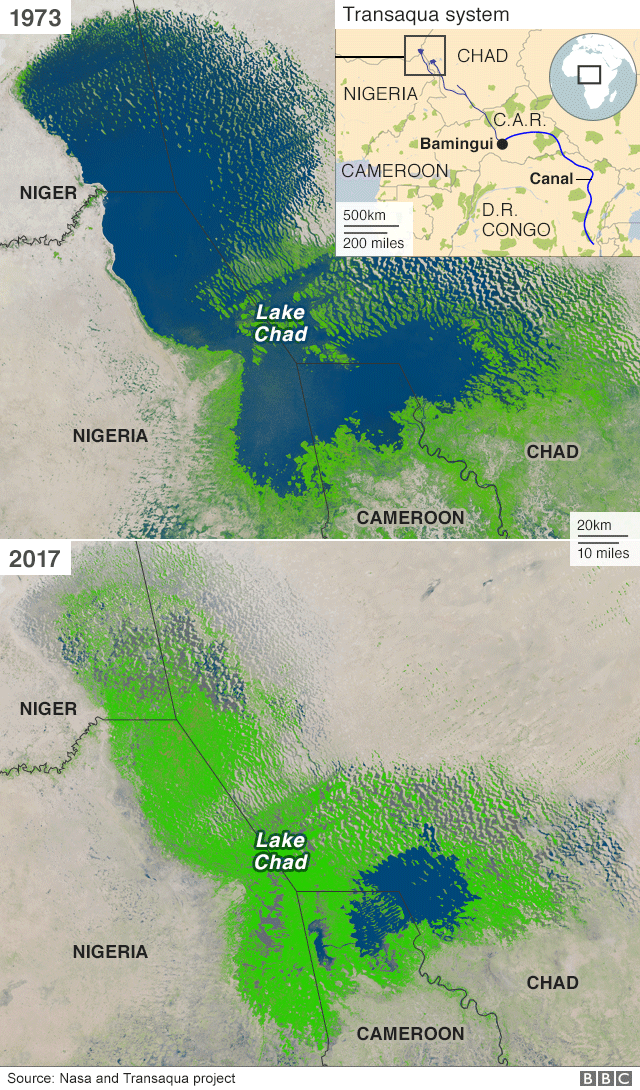 Lake Chad has shrunk by 90% since the 1960s, due to climate change, an increase in the population and unplanned irrigation. Its basin covers parts of Nigeria, Niger, Chad and Cameroon, and has been a water source for between 20 million and 30 million people.

But with the desert encroaching further every year, it is getting increasingly difficult for families to make a living through agriculture, fishing and livestock farming. The UN says 10.7 million people in the Lake Chad basin need humanitarian relief to survive.

“We used to pass fields of maize on our way to the lake and there were vast numbers of boats bobbing up and down on the water back then, and huge fish markets,” says Bale Bura, who grew up by the lake in the 1970s and now works for the Lake Chad Fishermen’s Association.

Now far fewer farmers are able to earn a living on the mineral-rich but bone-dry shores.

This is one reason why the delegates in Abuja decided to dust off a scheme first mooted back in 1982 by the Italian engineering company Bonifica Spa.

It came up with Transaqua – a plan to construct a 2,400km (1,500 mile) canal to transfer water from the upstream tributaries of the mighty Congo River all the way to the Chari River basin, which feeds Lake Chad.

This is yet another piece of lazy reporting by the BBC, Lake Chad may be shrinking, but it has nothing to do with “climate change”.

In common with much of the Sahel, rainfall amounts in Chad fell drastically during the 1970s and 80s. But since then they are back to historically normal levels.

The Sahel drought was of course during a time of global cooling, when tropical rainbelts were squeezed closer to the equator, something that was well understood at the time by HH Lamb and many other climate scientists.

Lamb traced the same pattern back to earlier ages. In “Climate, History and the Modern World”, he noted that in the desert regions of north Africa there was more moisture than now all through the high Middle Ages and after, from the 11th to 14thC.

In the meantime, we do know, from the pollen analysis researches of J Maley of the Universite des Sciences et Techniques du Languedoc at Montpelier, that in the Lake Chad Basin there was a maximum occurrence of the pollens of the plants of the Sudan-Guinean monsoon zone flora between about AD 700 and 1200 and that these and other water-demanding plants declined rapidly over the period 1300-1500.

More recent studies have found that historically the West African Sahel has regularly suffered much worse droughts than in the 1970s. The most recent mega-drought was just 500 years ago, spanning 1400 to 1750 and coinciding with Europe’s Little Ice Age. At the time, Lake Bosumtwi dropped so low for so long that a forest sprouted on the crater’s edges. Those trees now stand in 15 to 20 metres of water .

The submerged trees on Lake Bosumtwi, Ghana, stand in 15 to 20 metres of water

The facts are quite clear – Lake Chad and the rest of the Sahel are wetter during periods of global warming, and drier during cooling.

As the BBC mentions, populations around Lake Chad have soared in recent decades, and demand for water has increased accordingly. Nigeria’s population alone has tripled since the 1930s.

There is simply no reason to invoke ManBearPig.

NASA’s Earth Observatory has a small piece about Lake Chad, which notes:

Found at the intersection of four different countries in West Africa (Chad, Niger, Nigeria, and Cameroon), Lake Chad has been the source of water for massive irrigation projects