Ruffalo’s death wish for Limbaugh follows a long line of climate activists who have issued similar calls for harm to come to climate skeptics. See:

Warmist’s Death Wish: ‘I will probably enjoy a drink of expensive scotch when Marc Morano, James Inhofe, and Steve Milloy kick the bucket’

And if the weather does not kill, just use a weapon! See: ‘We could shoot him’ – Sir David Attenborough proposes shooting Trump to save climate in 2016 – ‘It’s not a bad idea’

Despite that, Actor Ruffalo also urged Americans to “direct some of your rage and loss” at “climate change deniers like [EPA Chief] Scott Pruitt.” Ruffalo has also made similar climate claims: See: Hulk Actor Mark Ruffalo: ‘Trump will have the death of whole nations on his hands’ 2014: Ruffalo: Questioning Gore & DiCaprio’s carbon footprint ‘defies the spirit’ of the climate march – ‘That is a question you shouldn’t be asking here today’

Hulk Actor Mark Ruffalo – Don’t make me angry: ‘Anyone who attacks Leonardo DiCaprio is either a coward or an ideologue’

One could write this off as just another emotional rant from an uneducated Hollywood celebrity. But Ruffalo has quite a following, including 3.4 million Twitter followers and the media’s admiration. So it is not without consequence when the actor invites his minions to attack a Trump Administration cabinet official and anyone deemed a climate change denier. Considering one of Ruffalo’s fellow Bernie Bros tried to assassinate several Republican congressmen earlier this summer, nearly killing one of them, it’s outrageous for a top celebrity activist to fan the flames in this kind of political environment. It’s also a bit ironic, since he routinely tweets about love, compassion, and tolerance.

But Ruffalo also claimed that GOP “deniers” will be “in part responsible for these disasters going forward.” The climate change activist community appears unified that Hurricane Harvey and Irma were somehow made worse by “climate deniers” and these “deniers” should be punished because they are guilty of “murder.”

“The victims of Hurricane Harvey have a murderer—and it’s not the storm.​..What makes this so infuriating is that it shouldn’t be happening. Experts have warned for decades that global warming would increase these sorts of weather extremes and that people would suffer and die if protective measures were not implemented,” Warmist Mark Hertsgaard wrote in The Nation for the September 25 issue.

“The first step toward justice is to call things by their true names. Murder is murder, whether the murderers admit it or not. Punish it as such, or we encourage more of the same,” Hertsgaard wrote. “It is past time to call out Trump and all climate deniers for this crime against humanity. No more treating climate denial like an honest difference of opinion.”

“When the president announced in June that he was withdrawing the United States from the Paris climate accord, I wrote in The Nation: ‘To refuse to act against global warming is to condemn thousands of people to death and suffering today and millions more tomorrow. This is murder, even if Trump’s willful ignorance of climate science prevents him from seeing it,” he added.

Meanwhile, other environmental activists prayed for Hurricane Harvey to hit Texas so that it could damage it’s oil pipelines.

“Yes I am praying the Hurricanes hit full force to stop the illegal no federal permit permit Valley Crossing Pipeline,” Texas’ Carrizo-Comecrudo Tribe chairman Juan Mancias posted a day before Harvey made landfall in Texas. “It will cost Enbridge and Spectra more $$$$.”

The two hurricanes also prompted other climate activists to demand “big oil must pay for climate change” because “their products contributed substantially to climate change.”

Climate Activists Peter C Frumhoff & Myles R Allen wrote in the UK Guardian that they blame industry for worsening storms.
“We know that the costs of both hurricanes will be enormous and that climate change will have made them far larger than they would have been otherwise,” Frumhoff and Allen wrote.
But others noted that fossil fuels are indispensable when facing natural disasters.  See: Alex Epstein on Stossel: ‘I Love Fossil Fuels’ – ‘The fossil fuel industry is not taking a safe climate and making it dangerous. They are taking a dangerous climate and making it safe’ & Alex Epstein praises oil & gas industry: ‘Thousands upon thousands of lives saved in Texas thanks to fossil fuels and the development they make possible’
Flashback 2016: Marc Morano: “This is all part of a financial scheme…Warmist attorneys general will use any storm now to get money from energy companies claiming that their company made tornadoes, hurricanes, floods and droughts worse. They will use any bad weather event to shake down energy companies. That is why the extreme storm meme is so important.”
#
Climate Depot’s point-by-point rebuttal to warmist claims on extreme weather events
Warmist claims from UK Independent Article – Via UK Independent:

Climate Depot Response: “A meaningless statement. Extreme weather events have always happened and will always happen.” See: UK Prof. Philip Stott: ‘From the Babylon of Gilgamesh to the post-Eden of Noah, every age has viewed climate change cataclysmically, as retribution for human greed and sinfulness.” “Extreme weather events are ever present, and there is no evidence of systematic increases.”

Claim: “The world is going to be hit by more horrifying weather events like the hurricanes Irma and Harvey.”

Climate Depot Response: “Yes. That is true. The world has always been hit by horrific storms and extreme natural events. Climate activists are basically saying ‘many bad things will happen because of global warming’ and then when a bad thing happens, they tout ‘we predicted it!.’ But if you look at the history of major landfalling hurricanes, you can see a declining trend as CO2 has risen. See: Chart: As CO2 has risen, major landfalling US hurricanes declining over past 140 years – ‘Maybe we need MORE CO2’

Claim: “Global warming is likely to trigger a run of extreme weather events, they say, and like the recent hurricanes they may unfairly hit the poor.”

All extreme weather and other disasters “unfairly hit the poor” including war, famines, etc. The “poor” will always have it worse than the wealthier when it comes to resources to battle disruptions.

Claim: “The rapid pace of climate change is set by government policies in the U.S. and many other countries.”

Climate Depot Response: “Wow. Governments set the “pace of climate change.” About as likely as witches controlling the weather.

Claim: “Planet Earth’s climate is in upheaval and we know exactly what is causing it: right now.”

‘Three Category 5 hurricanes have made landfall in the U.S. since 1924’

Is Irma really strongest hurricane ever? ‘Not really’ – Ranked 10th for ‘intensity’ – Tied for 2nd in Wind Speed

Statistician Bjorn Lomborg: “Harvey and Irma are terrible, but we need perspective: Major landfalling US hurricanes trending downwards over past 140 years.” 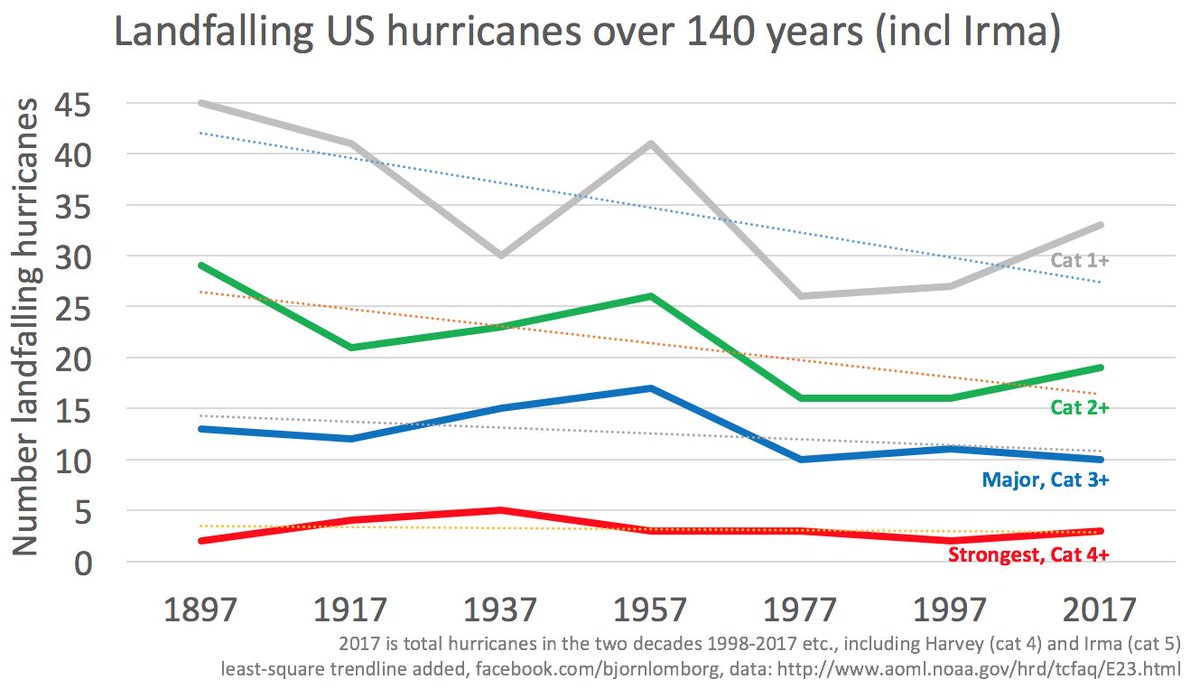 Chart: As CO2 has risen, major landfalling US hurricanes declining over past 140 years – ‘Maybe we need MORE CO2’

Claim: ‘Hurricane Irma Should Shut Up All the Global Warming Deniers for Good’

The so-called “consensus” is very unclear about hurricanes.

Michael Mann joins a long list of doomsayers who have predicted similar end times predictions about “global warming.” In 2004, the UK’s Sir David King suggested Antarctica would be the only place left on Earth cool enough for humans to live.

UK Independent article excerpt from 2004: “Antarctica is likely to be the world’s only habitable continent by the end of this century if global warming remains unchecked, the Government’s chief scientist, Professor Sir David King, said last week.”

Flashback 2007:UK Green Guru James Lovelock Predicts Global Warming Doom: ‘Billions of us will die; few breeding pairs of people that survive will be in Arctic’  (But Lovelock would later recant and become more skeptical of climate change. See: Alert: ‘Gaia’ scientist James Lovelock reverses himself: I was ‘alarmist’ about climate change & so was Gore!

Former NASA scientist James Hansen on NBC’s Nightly News: “Boston, Philadelphia, Washington, Miami. They would all be under water.UN IPCC’s Michael Oppenheimer on ABC News, 20/20: “If the sea level rise occurred fast enough, some major cities might have to be abandoned, like, for instance, London.”  (Both of above clips  of Hansen & Oppenheimer appeared in Climate Hustle film. )

Global warming campaigners have seized the opportunity to link Hurricane Harvey to their cause, just as they have done with previous hurricanes.

Here we go again: Every hurricane is ‘what climate change looks like’ according to climate activists

Climate activists waste no time blaming, exploiting and claiming every hurricane that makes landfall in the U.S. is “what climate change looks like.” Hurricane Harvey is the latest hurricane to get this treatment. Below are a few examples. (Also see: What Hurricane ‘consensus’?! ‘Global warming’ causes MORE hurricanes — Except when it causes LESS hurricanes)

#
Flashback 2012: Superstorm Sandy Is ‘What Global Warming Looks Like’ – Environmental News Service – October 30, 2012: Dan Lashof, who heads the Natural Resources Defense Fund, blogged, “This mega-storm is just one more sign of the new normal that will continue as long as we keep avoiding addressing climate change. Just like the unprecedented droughts, flooding and heat we all experienced this year, storms like Hurricane Sandy is what global warming looks like. This is the new normal.”

#
Flashback 2015: “Hurricane Matthew looks a lot like the future of climate change” – CNN – By John D. Sutter – October 7, 2016: But as the impact of the storm becomes clear, there’s an uncomfortable truth the rest of us should wrestle with: Hurricane Matthew looks a lot like future climate change. And if we want to stop storms like this from getting even more intense, we need to do everything we can to rid the economy of fossil fuels.

Reality Check: Hurricane Irma Is NOT the Most Powerful Atlantic Hurricane Ever Recorded