Study: Melting sea ice could help cool the planet by flooding the atmosphere with particles that deflect sunlight. - The study wa published by the American Meteorological Society.

Australian research suggests climate modelers have underestimated a natural “thermostat” that helps alleviate the rise in temperatures: immense quantities of reflective compounds, emitted by marine microbes, that act like a handbrake on global warming.

Melting sea ice could help cool the planet by flooding the atmosphere with particles that deflect sunlight.

Australian research suggests climate modellers have under­estimated a natural “thermostat” that helps alleviate the rise in temperatures: immense quantities of reflective compounds, emitted by marine microbes, that act like a handbrake on global warming. 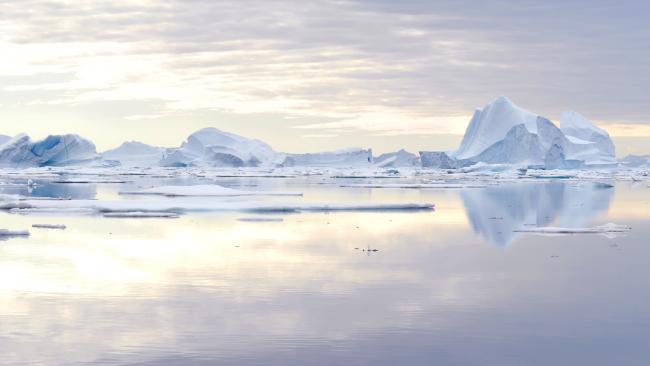 Immense quantities of reflective compounds, emitted by marine microbes, act like a handbrake on global warming.

The study, published by the American Meteorological Society, suggests an overlooked source of these so-called aerosols — algae living in ice — could jam the handbrake on even harder. Lead author Albert Gabric said with the Arctic expected to see ice-free summers within a decade, far more of the aerosols would be emitted.

“Whether that can slow the rate of warming of the Arctic is the trillion-dollar question,” said Dr Gabric, a marine biogeo­chemist with Griffith University in Brisbane.

Climate scientists have long known that aerosols help mitigate global warming by bouncing sunrays back into space, and by altering clouds to make them more reflective. Experts believe half of the ­potential warming from greenhouse gases may be offset in this way.

Much research has focused on aerosols produced artificially, through the burning of fossil fuels and vegetation. Scientists worry that if China switched to renewable sources of energy overnight, it could trigger a massive surge in warming.

Aerosols are also produced naturally by volcanoes — such as the 1991 eruption of Mount Pinatubo in The Philippines, which is credited with cutting global temperatures by about 0.5C for two years — and by marine ecosystems.

Algae known as “phytoplankton” are a major contributor, with increasingly massive blooms of these marine creatures emerging in the warming Arctic waters.
The new study analysed terabytes of satellite data to track atmos­pheric aerosol concen­trations. For the first time, it identified sea ice as a “very strong source” of the airborne particles.

Dr Gabric said “ice algae” had evolved to tolerate the subzero temperatures of sea ice and the water that formed it. They used a compound called dimethyl sulfide as an “antifreeze” to survive the chill. “When the sea ice melts during spring, these algae don’t need that protection any more. They expel these compounds, which are degassed to the atmosphere and converted into sulfate aerosols very similar to what you get from burning sulphur-containing coal.

“This happens every year as the sea ice melts. The difference in recent decades is that the ice is melting a lot earlier. We now think that within 10 years there won’t be any ice in the Arctic during summer.”

He said the process had “absolutely not” been factored into the Intergovernmental Panel on Climate Change models of global warming. “The whole aerosol question and its relationship to warming is the biggest uncertainty to projecting what’s going to happen this century.

“This is a new area of ­research, primarily because people can’t get up there and measure it very easily. You need an ice­breaker and a big gun to shoot any polar bears that might want to eat you,” he said.