It seems the Earth has a sense of irony. “Record-breaking heat” is possible at the People’s Climate March in DC on Saturday, where thousands of people are planning to protest against the president’s climate change policies on his 100th day in office. Trump’s initiatives include, but are not limited to, a 31% cut in the Environmental Protection Agency and potentially leaving the Paris climate agreement.

Among those suffering in the heat will be former vice-president Al Gore and, apparently, Leonardo DiCaprio. It is likely to take a titanic effort to change the other Wolf of Wall Street’s mind, however, as Trump has repeatedly said that the inception of climate change had nothing to do with mankind. Only 1,361 more days of this to go!

A group of senators, including Resistance regular Bernie Sanders, this week unveiled legislation that aims to transition to 100% clean and renewable energy by 2050.

The resistance’s next target: big banks 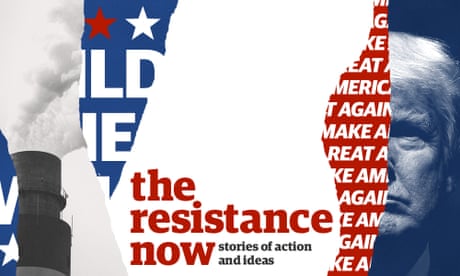 The Resistance Now: Sign up for weekly news updates about the movement

Hundreds of thousands of immigrants and their allies will be striking and marching around the country on 1 May. The May Day protests are traditionally led by unions and labor groups, but this year – galvanized by the Trump administration – immigration, racial justice, gender equality and LGBT groups will be playing a big part.

Demonstrations will take place in a number of states. Activist groups are launching a “Corporate Backers of Hate Campaign” on the same day, which will see demonstrations at the offices of companies seen to be supporting or benefiting from the Trump presidency. Targets include JP Morgan Chase, Wells Fargo and Goldman Sachs.

Trump will be met by thousands of Luke Skywalkers, Hans Solos, and, depending on individuals’ tastes, Jar Jar Binkses when he returns to New York City next week.