#California’s Gov. #Jerry Brown announced the ‘never-ending drought’ was officially over, despite previous comments that global warming was making it the ‘new normal.’ Numerous studies showed the state’s drought was normal, not historic, and unrelated to #Climate Change; previous dry spells in the Golden State have lasted more than 1,000 years.

A combination of factors drove California’s water shortage: an enormous Pacific blob of warm air off the Northwest coast and a high-pressure system stuck off the West Coast that was interrupting the normal cycle of yearly rains and snow. During the winter, meter-high snow packs would normally blanket the Sierra Mountains, melting in the spring and filling reservoirs below.

Another major issue: the state was still using the 1960’s open-air aqueduct system and leaky pipelines to transport water from rainier areas to drier areas, losing millions of gallons in the process. The aging infrastructure was created under Gov. Pat Brown (the current governor’s father) back in the 1960s. One-half of the state’s population lives in regions containing one percent of the natural supply of water, while the other half doesn’t.

In California, all eyes on dam’s eroding spillway as storms loom http://usat.ly/2kE3APr

Instead of using taxpayer dollars to upgrade the neglected system of dams, reservoirs, aqueducts, and pipelines, thus preventing a future catastrophe related to the uneven distribution of rainfall in the state, Brown spent billions on his bullet train to nowhere. Millions of gallons of freshwater currently flow into the Pacific Ocean, with even more lost to evaporation under the beating sun.

The governor’s announcement came as more springtime storms were on track to hit the already waterlogged state, taxing reservoirs, rivers, and dams. Four counties with low groundwater levels were still under emergency orders, though they were expected to be lifted soon. The drought has hurt native fish that migrated up once-dry rivers, forced farmers to rely more heavily on groundwater, and killed millions of trees. 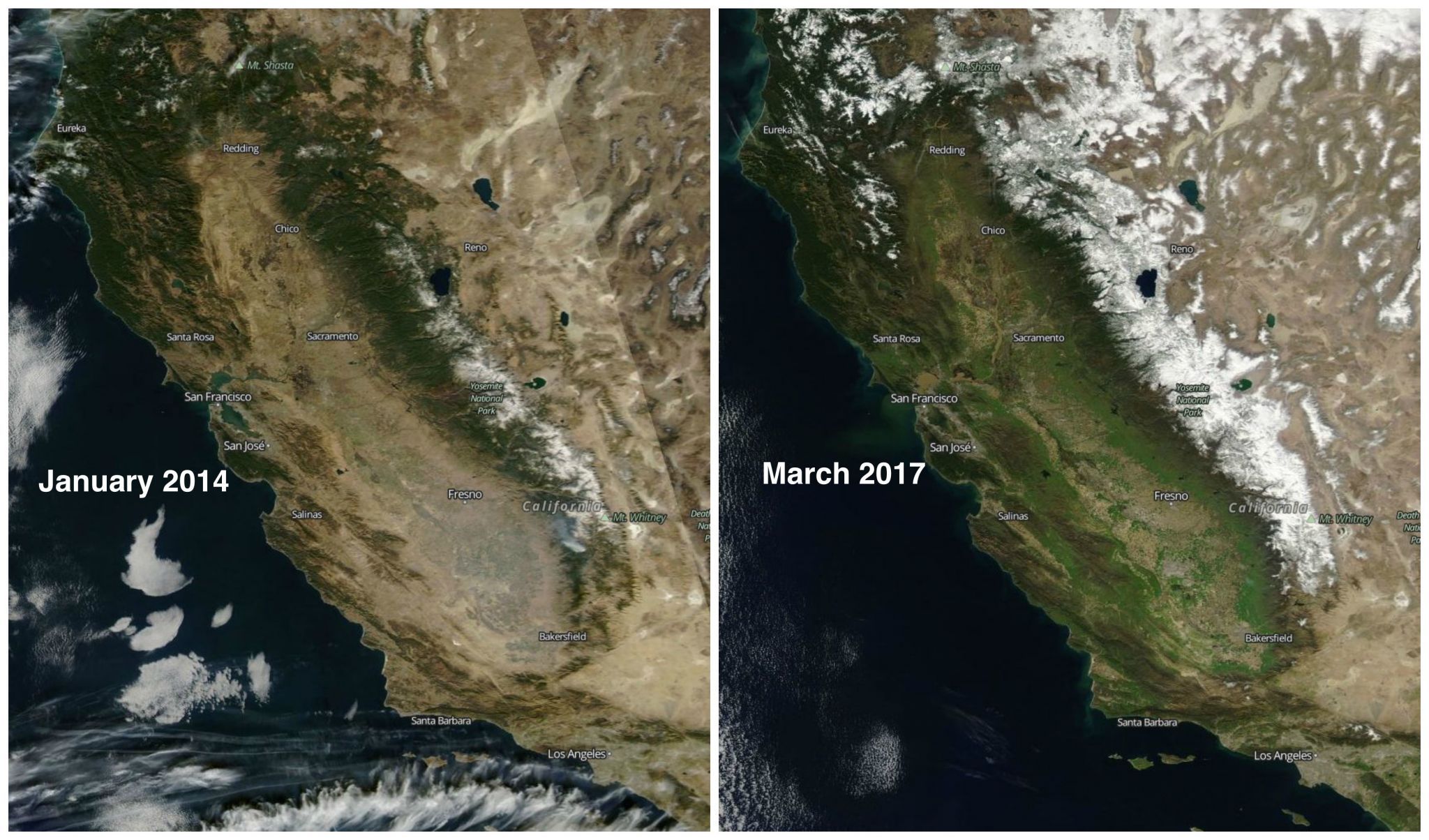 @NASA satellites captured images of northern California before and after 2017 storms http://buff.ly/2nT45Jx  via @SFGate

While climate alarmists are worried about the next drought, it’s worth remembering that at the height of the drought hysteria, NOAA issued a report that said it wasn’t part of any long-term water shortages and couldn’t be blamed on climate change. Other studies backed this up.

Brown, however, weaponized this natural event to further his global warming agenda, pointing to it as confirmation of his beliefs while ignoring the science. This led to cap-and-trade fees, higher gasoline taxes, and costly regulations. In a statement, Brown warned the “next one could be around the corner.”