While many Coloradans were likely enjoying the warmth provided by fossil fuels after a night that saw temps drop “as low as minus-11 degrees,” a small group of “Keep It In The Ground” (KIITG)protestors stood in the extreme cold this morning to once-again protest energy development on public lands. 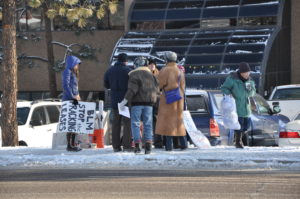 Carrying signs demanding a ban on fracking and an end to fossil fuel development on public lands, the protestors attempted to capture the attention of the media and commuters on a morning when many Coloradans were likely thankful for heat made possible by fracking.

In a sign that even some of the most extreme anti-fracking protestors could have been more interested in staying indoors, the small group of about ten protestors paled in comparison to previous protests held at the Bureau of Land Management (BLM) office in Lakewood, CO, that has been a frequent target of the KIITG activists. 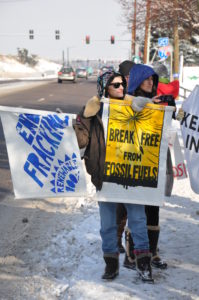 The protest, organized by national KIITG activist groups, 350.org and Food & Water Watch, comes on the heels of a series of sweeping defeats for the groups in the state. Earlier this year, Coloradans resoundingly rejected their efforts to place a pair of ban-fracking initiatives before the state’s voters, an effort that was marked by a series of embarrassing missteps, including delivering half-empty boxes that they portrayed as full of petitions in support of their initiatives, and even staging a fake accident where a protestor pretended to be hit by an SUV.