Reporters not buying explanations for Kerry 'official' visit to Antarctica

Reporter to State Dept: Does Kerry 'want to knock Antarctica off his bucket list' at taxpayer expense?

John Kerry lands in Antarctica, highest US official to visit

State Department spokesman John Kirby on the cost to taxpayers of Secretary Kerry’s trip to the South Pole:

“I– I– will see if I can get you– uh– an estimate. I don’t have that, but– uh– uh– I think– you know– eh– any basic understanding or attempt to understand climate change you have to understand what’s going on in the Arctic and the Antarctic, especially with melting glaciers and ice and the sea level rise that can come from that. […] He wanted to go down there and see that for himself.”

Reporter asks if the trip is “basically that the Sec. wants to knock Antarctica off his bucket list and he is doing it sort of on the taxpayer.”

Daily Caller: A reporter grilled Kerry’s staff on why the secretary of state was going to Antarctica if there was no “real technically diplomatic component” to the trip, and another asked how much it would cost taxpayers for him to “go look around” the continent.  “I will see if I can get you an estimate,” State Department spokesman John Kirby told reporters in a recent press conference. “I don’t have that, but I think any basic understanding or attempt to understand climate change you have to understand what’s going on in the Arctic and the Antarctic, especially with melting glaciers and ice and the sea level rise that can come from that.” “He wanted to go down there and see that for himself,” Kirby said. One reporter said there was concern this trip was simply for Kerry to “knock Antarctica off his bucket list” on the taxpayer’s dime.

Despite widespread scientific agreement climate change is not affecting Antarctica, Secretary Kerry flew there anyways for a two-day visit.

Climate Depot’s Scientific Round Up of Data & Studies On Antarctica:

35-Year Cooling of South Pole Confirmed By NASA – Antarctica Ice Sheets Safe – ‘NASA’s satellites have now been measuring global temperatures for a full 35 years (420 months through November 2013), including the Antarctic. The above chart documents the measured southern polar region temperatures. As can be seen, there has been a cooling trend – granted, a very tiny -0.04°C/century, but it remains far removed from the IPCC’s unicorn science of “amplified” and dangerous polar warming.
Study Shows Global Warming Thawed Antarctica 128K Years Ago: Before Fossil Fuels
An Inconvenient Truth: Few Signs Of Global Warming In Antarctica
British Antarctic Survey: Antarctic Peninsula has been cooling since 1998
Study finds West Antarctica snow accumulation ‘increased dramatically’ 30% from 1900-2010
Scientist: ‘All the hoopla about this being hottest year ever is contradicted by findings from Antarctic ice cores’ – Scientist: ‘All the hoopla about this being the hottest year ever is contradicted by findings from Antarctic ice cores that during the Eemian, the last interglacial (LIG; 130,000–115,000 years ago), global climate was warmer than today and global mean sea level was 6-9 m higher’.
Study: Only 0.18% Of Antarctica Isn’t Covered By Snow And Ice
New NASA Survey Finds Antarctica Covered in More Ice Than Previously Thought
AP reporter Seth Borenstein at it again hyping Antarctic melt fears – Recycles same claims from 2014, 1990, 1979, 1922 & 1901! – Climate Depot’s Point-By-Point Rebuttal – ‘The Associated Press is recycling more than century old Antarctica ice sheet melt and sea level rise fears.  Reporter Seth Borenstein is not the first one to hype these same Antarctica melt fears. Virtually the exact same claims and hype were reported in 2014, 1990, 1979, 1922 and 1901!

1979 NYT: “Boats could be launched from the bottom of the steps of the Capitol’ in DC –‘Experts Tell How Antarctic’s Ice Could Cause Widespread Floods – Mushy Ice Beneath Sheet’]

1922: ‘Mountain after mountain of [Antarctic] ice will fall into the sea, be swept northwards by the currents, and melt, thus bringing about, but at a much more rapid rate, the threatened inundation of the land by the rising of the sea to its ancient level.‘ – The Mail Adelaide, SA – April 29, 1922

1901: ‘London On The Border of Destruction’: ‘To Be Wiped Out By A Huge Wave’ – Queanbeyan Age – August 10, 1901 – Excerpt: ‘Geologists believe that this great ice sucker has reached the stage of perfection when it (Antarctica) will, break up again, letting loose all the waters of its auction over the two hemispheres, and completely flooding the low-lying lands of Europe, Asia, and North America.’ 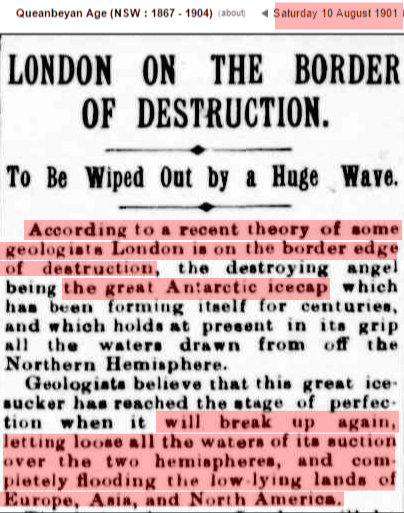 Which is it? Climate change causes less ice —  or MORE ice?!

Flashback 1977 Shocker: Scientists Knew Man Was Not Responsible! West Antarctic Ice Sheet Collapse ‘has nothing to do with climate, just the dynamics of unstable ice’