India is set to surpass the U.S. as the world’s biggest coal producer after China by 2020, as state-miner Coal India Ltd. ramps up output to meet demand from domestic power producers, according to BMI Research. 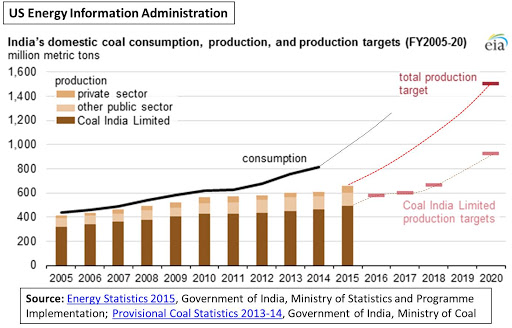 The South Asian nation’s share of world output will increase to 12.7 percent by 2020 from 9.8 percent in 2016, BMI said in a report Thursday. It cautioned that the country will still fall short of the government’s ambitious coal output target and domestic demand will continue to exceed production up to 2020.

India, where coal accounts for 61 percent of electricity generation capacity, is seeking to reduce imports of the fuel by boosting domestic output. India foresees coal as a dominant source of energy at least for a couple of decades, while other countries, including the U.S., are moving faster toward replacing the fuel with cleaner energy sources such as natural gas to meet tougher emissions standards.

India plans to expand coal output to 1.5 billion metric tons by 2020 from an estimated 634 million tons in the year ended March 31. China produced nearly 3.7 billion tons of coal last year, according to the country’s National Bureau of Statistics.