Climatologist Dr. Roger Pielke Sr. slams NOAA study as 'manipulation of science for political reasons.' 'NOAA should be embarrassed.'
Pielke Sr.: 'From under reviewed paper to NOAA PR to USA Today. A dismaying example of manipulation of science for political reasons.'
Climate Depot's Marc Morano on new NOAA study: "No matter how hard federally funded climate activist scientists at NOAA try to bend and twist models and data to make it appear the invisible hand of 'global warming' has a role in almost every weather event, the facts refute their claims."
Morano: "Studies show that rainfalls used to be longer and worse. Ironically, heavy rains used to be caused by 'global cooling' in the 1970s. NOAA's overuse of climate models to claim such nonsense should be audited. The scientists know better. But it appears a one day flashy headline on 'record' rains based on dubious models that contradict data, seems to be too enticing for them to pass up."
#
Real Climate Science website's Tony Heller's analysis: NOAA rain modeling study ‘has no scientific basis, and ignores all available actual data’ – ‘Man-Made Modeling Abuse Increases The Odds Of NOAA Fraud’ -  'The NOAA study has no scientific basis, and ignores all available actual data. Software models can be written to produce any result the author wants to produce. They are not evidence of anything other than deep corruption at NOAA.' - 'There has been no increase in heavy rains in Louisiana.' Dr. Pielke, Sr., wrote that “NOAA should be embarrassed doing this press release.  “It is only submitted for review! But PR shows NOAA bias,” he added.

Climate skeptics scoff as NOAA quickly links global warming, La. floods – Wash Times features Climate Depot – Heidi Cullen’s involvement came as a red flag for Georgia Tech climate scientist Judith A. Curry, who also raised questions about releasing the study before a peer review. “This study involves several scientists from NOAA, along with a scientist that works for an advocacy group,” said Ms. Curry in an email. “NOAAhas a team in Boulder, Colorado (led by Marty Hoerling) that typically conducts quite sensible analyses of such extreme events. So I don’t know why NOAA issued such a press release about a new publication without checking with this other team at NOAA.”

Heavy Rain Used To Be Caused By Global Cooling, But Now Caused By Global Warming: Time Mag. 1974: ‘During 1972 record rains in parts of the U.S., Pakistan and Japan caused some of the worst flooding in centuries’ 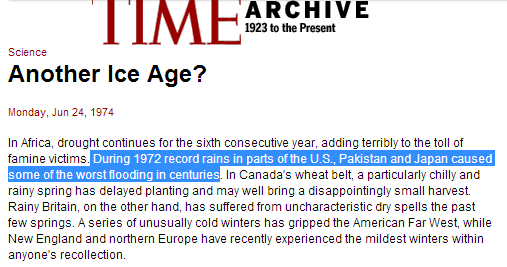 Flashback NOAA 1974: ‘Extreme weather events blamed on global cooling’ – NOAA October 1974: ‘Many climatologists have associated this drought and other recent weather anomalies with a global cooling trend and changes in atmospheric circulation which, if prolonged, pose serious threats to major food-producing regions of the world’

‘There has been no increase in heavy rains in Louisiana.’ ‘New Orleans was founded in 1717, against the objections of the chief engineer who said it flooded all the time.’

Prof. Roger Pielke Jr. Rips flooding claims using UN IPCC quotes: ‘No gauge-based evidence has been found for a climate-driven, globally widespread change in the magnitude and frequency of floods’

Pielke Jr.: What did UN IPCC AR5 conclude on trends in flooding? 5..4..3..: ‘There continues to be a lack of evidence & thus low confidence regarding the sign of trend in the magnitude &/or frequency of floods on a global scale.’
Pielke Jr.: But doesn’t more extreme precipitation mean more floods? Again the SREX authors in 5..4..3: ‘Despite the diagnosed extreme-precipitation-based signal, and its possible link to changes in flood patterns, no gauge-based evidence has been found for a climate-driven, globally widespread change in the magnitude and frequency of floods during the last decades.’
Pielke Jr. : ‘How about IPCC SREX authors on floods? 5..4..3..: ‘A direct statistical link between anthropogenic climate change and trends in the magnitude/frequency of floods has not been established”

Link to full testimony of Roger Pielke Jr. to Congress: ‘It is further incorrect to associate the increasing costs of disasters with the emission of greenhouse gases’

• “Floods have not increased in the US in frequency or intensity since at least 1950. Flood losses as a percentage of US GDP have dropped by about 75% since 1940”

“The framework illustrates that unreliable climate simulations are prone to overestimate the attributable risk to climate change. Climate model ensembles tend to be overconfident in their representation of the climate variability which leads to systematic increase in the attributable risk to an extreme event. Our results suggest that event attribution approaches comprising of a single climate model would benefit from ensemble calibration in order to account for model inadequacies similarly as operational forecasting systems.”

“[T]he intensification of the twentieth-century-mean hydroclimate anomalies in the simulations, as compared to previous centuries, is not supported by our new multi-proxy reconstruction. This finding suggests that much work remains before we can model hydroclimate variability accurately, and highlights the importance of using palaeoclimate data to place recent and predicted hydroclimate changes in a millennium-long context.”

According to a new study, the Northern Hemisphere has experienced considerably larger variations in precipitation during the past twelve centuries than in the twentieth century. Researchers from Sweden, Germany, and Switzerland have found that climate models overestimated the increase in wet and dry extremes as temperatures increased during the twentieth century.

“‘Tipping points’ (TPs) are thresholds of potentially disproportionate changes in the Earth’s climate system associated with future global warming and are considered today as a ‘hot’ topic in environmental sciences. In this study, TP interactions are analysed from an integrated and conceptual point of view using two qualitative Boolean models built on graph grammars. They allow an accurate study of the node TP interactions previously identified by expert elicitation and take into account a range of various large-scale climate processes potentially able to trigger, alone or jointly, instability in the global climate. Our findings show that, contrary to commonly held beliefs, far from causing runaway changes in the Earth’s climate, such as self-acceleration due to additive positive feedbacks, successive perturbations might actually lead to its stabilization.”

“Substantial changes in the hydrological cycle are projected for the 21st century, but these projections are subject to major uncertainties. In this context, the ‘dry gets drier, wet gets wetter’ (DDWW) paradigm is often used as a simplifying summary. However, recent studies cast doubt on the validity of the paradigm and also on applying the widely used P-E (precipitation-evapotranspiration) metric over global land surfaces. Here we show in a comprehensive CMIP5-based assessment that projected changes in mean annual P-E are generally not significant, except for high-latitude regions showing wetting conditions until the end of the 21st century. Significant increases in aridity do occur in many subtropical, but also adjacent humid regions. However, combining both metrics still shows that ca. 70% of all land area will not experience significant changes. Based on these findings we conclude that the DDWW paradigm is generally not confirmed for projected changes in most land areas.”

Salon Mag. blames rainfall on AGW: ‘The deluge you’re getting may be due to climate change’ – Debunked: ‘Extreme Rainfall Records In The States’ Most are pre-1950, none since 1996

Reality Check on Salon Mag.: “Extreme Rainfall Records In The States” Most are pre-1950, none since 1996:

No new records have been set since 1996 and most are pre-1950. Not much sign of global warming having any effect there.

1000 year flood? ‘The majority of USGS streamgages had flood peaks that were less than 10-year floods.’ –  ‘Analysis show NO indication that a 1000-year flood discharge occurred at any USGSstreamgages’

South Carolina Floods – ‘A Thousand Year Rainfall’? Actually the worst since 1999! ‘There is nothing unprecedented about the single day rainfall this week in Charleston’
#
[It’s Here! CLIMATE HUSTLE DVDs and Blu-rays are NOW AVAILABLE! Order yours today!
Groundbreaking film that packed theaters across America on May 2nd called “brutal and extremely funny” by National Review, “tremendous” by Cal Thomas, and World Net Daily says it “could be the most important movie of the year.” (Order now: www.ClimateHustle.com)