NOTE: This is the fifteenth monthly update with our new Version 6.0 dataset. Differences versus the old Version 5.6 dataset are discussed here. Note we are now at “beta5” for Version 6, and the paper describing the methodology is still in peer review.

The rapid cooling is from the weakening El Nino and approaching La Nina conditions by mid-summer or early fall.

With most models predicting La Nina conditions by the autumn, we can expect temperatures to tumble a lot further by the end of the year.

Flashback 1974: ’60 theories have been advanced to explain the global cooling’

The ‘Global Warming’ Pause Update: May 2016: 18 years, 9 months – ‘The Pause still refuses to go away, despite all expectations.’ 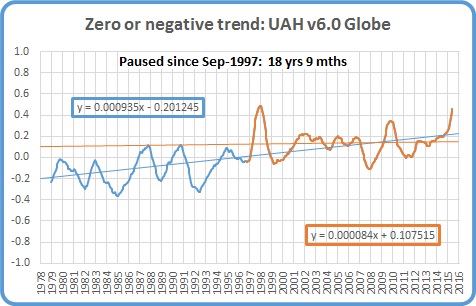