Climate activists sour on UN climate deal: ‘It won’t save the planet…it saves the chance of saving the planet’ – ‘Bullsh*t’ – ‘Fraud…Fake’ – ‘Magical Thinking’

'It's going to burn our planet'

Warmist George Monbiot: ‘I’m sorry to disappoint you, but the Paris deal is bullshit’

Monbiot: ‘The talks in Paris are the best there have ever been. And that is a terrible indictment.’

Former NASA lead ‘global warming’ scientist James Hansen on UN summit: ‘It’s a fraud really, a fake. It’s just bullshit’ – Mere mention of the Paris climate talks is enough to make James Hansen grumpy. The former Nasa scientist, considered the father of global awareness of climate change, is a soft-spoken, almost diffident Iowan. But when he talks about the gathering of nearly 200 nations, his demeanor changes. “It’s a fraud really, a fake,” he says, rubbing his head. “It’s just bullshit for them to say: ‘We’ll have a 2C warming target and then try to do a little better every five years.’ It’s just worthless words. There is no action, just promises. As long as fossil fuels appear to be the cheapest fuels out there, they will be continued to be burned.” 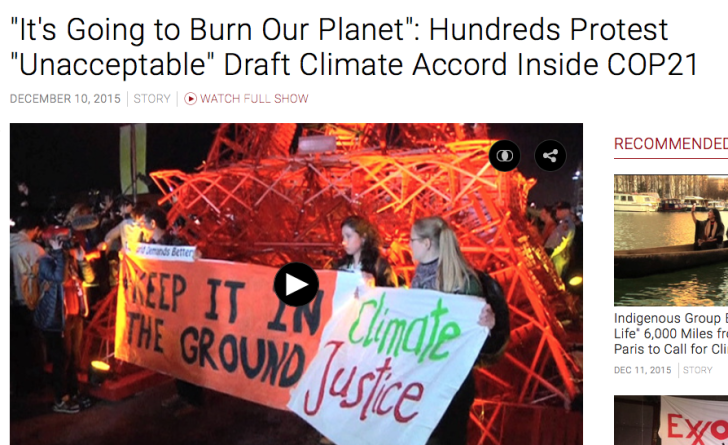 #
‘Paris pact not enough to save the world’
#
NYT’s Andrew Revkin on UN deal: ‘There’s a lot of magical thinking in all of this’ – Revkin: ‘There are enormous assumptions in most calculations’ – ‘Most such pledges don’t go beyond 2030, and those from developing countries are mostly “conditional” — they’ll proceed if wealthy countries pay the cost or otherwise help.’
#
‘Is that green smoke we see above Notre Dame? That can only mean one thing – – we have a climate deal!’ – A Manufactured ‘Success’ in Paris – Walter Russell Mead in The American Interest: Nobody is serious about this “agreement,” but the diplomats have agreed that a hollow facade of an agreement is preferable to the PR disaster that failure would have been.’
Related Links:

Politico: ‘Obama’s fragile climate legacy’ – ‘Relies on the good will of Congress & next president to keep it in place’

Only 12 Months To Save The World (Again)! – Already plans are being drawn up for the next UN jamboree in Morocco!

Praise be to the — UN!? UN Climate Summit Healed The Climate?!

US forest fire burn acreage has plummeted since the 1930’s

US tornado deaths have plummeted to record lows since the 1930’s.

The huge improvement in the US climate since the 1930’s can only be attributed to the healing powers of the great prophet Obama, and his revival meeting in Paris.the 1930’s

Disappointed Bill McKibben vows to use treaty, however phony, to attack fossil fuel industry Trying to make lemonade from the Paris lemon. McKibben writes in the NYTimes:

UN Green Climate Fund didn’t even collect last year’s paltry pledges There’s no money for poor countries. They will not be cutting emissions. Ninety percent short of the $100 billion-per-year “commitment,” the Green Climate Fund only “raised” part of the 10%.

NYTimes: A Signal to Industry to Go Green in an Era of Carbon Reduction Pretending the Paris deal is meaningful in hopes someone believes it is. The NYTimes reports:

NYTimes: A Climate Deal, 6 Fateful Years in the Making Coral Davenport melodramatizes the “making” of the Paris non-deal. The NYTimes reports:

WaPo: How one word nearly killed the climate deal The poor countries demand for “loss and compensation” payments was treated as an ordinary typographical error and erased. Mock heroics. No one would have “had” to do anything anyway. The WaPo reports:

Kerry: We Wouldn’t Have a Climate Agreement if There Actual Penalties for Not Reducing Emissions And, BTW, there’s no actual ‘agreement’ anyway. The Washington Free Beacon reports:

WSJ: Paris Climate of Conformity “It pays to be skeptical of politicians who claim to be saving the planet.” The Wall Street Journal editorializes:

‘Toothless’ climate change deal means Britain could be left pursuing ever tougher green targets “Other countries may fail to deliver on their promises, MPs warn.” May? Even if they do, so what? The Telegraph reports:

Paris conference: Panic over global warming collided with reality “Paris is the moment when the political panic over climate change finally begins to collide with inescapable realities.” Christopher Booker writes in the Telegraph:

New Zealand’s part to reduce global warming ‘a long process’ “This is 85 years away.” AAP reports:

NYTimes contradicts Obama on front page over value of climate treaty Obama says the treaty can “save the planet.” The Times says not. Obama said: But the NYTimes reports this morning on the front page:

Lomborg: Climate treaty to cost world £1.2 trillion per year but accomplish nothingI’m not sure anyone will do anything because of the climate treaty. The Daily Mail reports:

Video: Reporters shout, jump for joy after climate change agreement “She then compared the event to the suspense of watching a major 2002 soccer match between England and Brazil.” The Washington Examiner reports:

Guardian: ‘Almost 200 countries sign historic pledge to hold global temperatures to a maximum rise of 1.5C above pre-industrial levels’ Now all they need to do is find the thermostat. The Guardian reports: