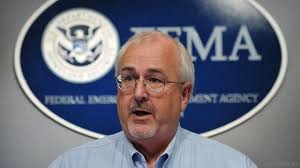 Flashback 2012: Obama Appointed FEMA Dir.: Frequency of Hurricanes Cyclical: Since 1850s ‘a cycle, & its over decades increased activity & decreased activity’ — Won’t Say If he Believes Global Warming Involved - Federal Emergency Mgt. Agency Dir. Craig Fugate: 'If you look back for the amount information we have going back to about 1850s, you'll see a cycle, and it's over decades of increased activity and decreased activity. And so that cycle has been there. As far anything driving that, I'd really defer to climate scientists. But the reality is the history says we've had this period of activity, we've had a period of quiet'

2015: FEMA to withhold disaster-preparedness funds from states that don’t plan for climate change

Fugate’s 2012 comments – Excerpt: Bill Press asked, “Mr. Director, it seems there’s a lot more tornado activity in a lot more places. Do you see increased activity — looking historically — to hurricanes today? And do you attribute any of that to global warming?”

Fugate in 2012: “Well, I’m not a meteorologist. I’m not a climate scientist, and hurricanes are cyclic,” Fugate responded. “I do know history, and if you look at history and you look at hurricane activity, there are periods of increased and decreased activity that occurs over decades,” Fugate said. “Throughout the ‘60s, ‘70s, early ‘80s, up until about ’95, the Atlantic was actually in a period of below-average activity, even though you had significant storms like Andrew, Frederic, and David.”…

Morano: ‘Louisiana gets the most FEMA funds due to Hurricanes and the current director Fugate in 2012 was not impressed that hurricanes were influenced by global warming. Louisiana Gov. Jindal can now cite Fugate’s own words as evidence that the FEMA director agrees with the so-called GOP ‘deniers’ on hurricanes not being caused by ‘global warming.’

Unless FEMA director Fugate retracts his comments, the questions looms: Will FEMA withhold funds from FEMA?!

The larger issue is that the states should always prepare for extreme weather regardless of any potential human influence on climate. The whole FEMA issue of withholding funds based on man-made ‘climate change’ acceptance is pure politics, not science.’

1) ‘This FEMA effort is part of a larger picture of global warming promoters attempting to silence skeptics before the UN Paris climate summit and the next Presidential election and its implications for EPA climate regulations.’ See: Climatologist Dr. Judith Curry: ‘I REALLY object to Obama’s ‘denier’ hunt…extreme scientization of political debate by Obama is absolutely pernicious to academic freedom’

2) ‘Global warming proponents are trying to intimidate GOP presidential hopefuls like Ted Cruz if they say anything skeptical on climate change.’ See: Warmist Smearing Ted Cruz With Junk Science about ‘pause’ & Jerry Brown: Opposition on climate change ‘borders on the immoral’ – Ted Cruz’s skepticism ‘unfit to be running for office’

3) ‘They are trying to intimidate any scientists who dared testify on behalf of GOP in Congressional hearings. (Pielke Jr., Curry, Lindzen, etc.)’ See: Shocking letter of intimidation from Congressman to MIT re climate skeptic Richard Lindzen

4) ‘They are trying to ban skeptics like me from appearing on TV because they believe the debate is over. There is petition drive aimed at TV producers by climate activists to ban all skeptics.’ See: ‘Merchants of Doubt’ producer seeks media ban on skeptics: ‘Tell news editors: Stop booking climate deniers!’

5) The Obama Admin. has a history of intimidating and silencing skeptics. See: Scientific Cleansing: Obama Interior Secretary Sally Jewell says ‘I hope there are no climate change deniers in the Department of Interior’ &   Skeptics blast Interior Sec. Jewell’s comments as ‘scientific cleansing’: Climate Depot’s Morano: ‘It’s a way for the Obama administration to silence any internal critics’

Extreme weather at or near historic lows:

Floods: Prof. Roger Pielke Jr. : ‘Are US Floods Increasing? The Answer is Still No’ — ‘A new paper out today shows flooding has not increased in U.S. over records of 85 to 127 years’ — Quick Flood Facts: ‘The world’s ten deadliest floods all occurred before 1976. The historical flood record is horrific. Here is a small sampling of news stories’
U.S. Heatwaves: ‘The frequency of 90 degree days in the US has plummeted. with three of the five mildest summers occurring since 2004′
Wildfires: 2014 – Quietest Fire Season Of The Decade according to data from the National Interagency Fire Center data — US Forest Fires Near Historic Lows: ‘Burn acreage is much less than half of normal’ according to data from the National Interagency Fire Center

Climate Depot Round Up:  ”Despite the fact that climate activists have changed renamed ‘global warming’ into ‘climate change’ and then to climate ‘disruption’ and ‘global weirding’, the weather and climate is failing to cooperate. Below is a round up of the latest on extreme weather data and studies.”

Fine print in Obama’s climate report breaks from warmist narrative — Admits no trends in droughts, storms, tornadoes and hail! – After cranking up the fear of increasing droughts, floods, hurricanes and tornadoes, the report offers some little disclaimers admitting to unsettled science: But the fine print that few will ever read acknowledges the real uncertainties of something as complex as the planet’s atmosphere. – “There has been no universal trend in the overall extent of drought across the continental U.S. since 1900,” the authors observe. We also learn that “trends in severe storms, including the intensity and frequency of tornadoes, hail, and damaging thunderstorm winds, are uncertain and are being studied intensively.”

New paper unable to link 2013 extreme weather of droughts, heavy rain & storms to AGW
Dr. Roger Pielke Jr. ‘the bottom line on this new NOAA special report: If you are attributing any extreme other than heat waves to Anthropogenic Climate Change, you are on weak (or worse) scientific ground.”

3,264 Days Without a Major (Cat 3 +) Hurricane Strike – ‘Nearly 9 years…the last being Wilma in October, 2005′ – Climatologist Dr. Roy Spencer: As of today (October 1) it’s been nearly 9 years since a major hurricane (Cat 3 or greater) has struck the U.S., the last being Wilma in October, 2005. Remember the 2005 hurricane season? Landfalling hurricanes right and left. Katrina! This was going to be the new normal in a Global Warming world. Then the bottom dropped out of tropical activity.

US Forest Fires Near Historic Lows: ‘Burn acreage is much less than half of normal’ according to data from the National Interagency Fire Center

Real Science: ‘Burn acreage so far this year in the US is lowest in a decade, less than half or normal, and one of the lowest on record.’

NPR: 3 new papers make the case that forest fires in the West today burn less than in historical times

California drought: Past dry periods have lasted more than 200 years, scientists say – ‘The state has been parched for much longer stretches before that 163-year historical period began’

Texas droughts – ‘The drought years of the 1950’s were both longer lasting , and more severe than the recent drought, as NOAA’s drought index shows.’

Prof. Roger Pielke Jr. Rips flooding claims using UN IPCC quotes: ‘No gauge-based evidence has been found for a climate-driven, globally widespread change in the magnitude and frequency of floods’

Pielke Jr.: What did UN IPCC AR5 conclude on trends in flooding? 5..4..3..: ‘There continues to be a lack of evidence & thus low confidence regarding the sign of trend in the magnitude &/or frequency of floods on a global scale.’ -Pielke Jr.: But doesn’t more extreme precipitation mean more floods? Again the SREX authors in 5..4..3: ‘Despite the diagnosed extreme-precipitation-based signal, and its possible link to changes in flood patterns, no gauge-based evidence has been found for a climate-driven, globally widespread change in the magnitude and frequency of floods during the last decades.’Pielke Jr. : ‘How about IPCC SREX authors on floods? 5..4..3..: ‘A direct statistical link between anthropogenic climate change and trends in the magnitude/frequency of floods has not been established”Prof. Pielke Jr. : ‘Are US Floods Increasing? The Answer is Still No’ — ‘A new paper out today shows flooding has not increased in U.S. over records of 85 to 127 years’ — ‘This adds to a pile of research that shows similar results around the world’

Quick Flood Facts: ‘The world’s ten deadliest floods all occurred before 1976. The historical flood record is horrific. Here is a small sampling of news stories’

Federal study finds no evidence that climate change caused more severe flooding during last century!– Inconvenient Reality: U.S. Geological Survey finds in some regions ‘floods become LESS SEVERE as greenhouse gas emissions have increased’ — USGS scientist Robert Hirsch: ‘Currently we do not see a clear pattern that enables us to understand how climate change will alter flood conditions in the future’ — But, USGS pleads they need more study (and money!): ‘Noted more research is necessary to better understand the relationship between climate change and flooding’

100/500 Year Floods : Every Few Weeks? Reality Check: ‘One of the big lies of 2011 is the claim that ‘the new normal is 100 year floods every year’ — ‘A search of news archives finds out that 100 year floods have been reported constantly, ever since someone thought the term up’

UK Scientist suggests Gore distorted his study: ‘Al Gore is doing a disservice to science by overplaying the link between climate change and weather’

Is Flood Magnitude in the USA Correlated with Global CO2 Levels? Answer: No — ‘The results of 21 peer-reviewed studies on flooding & climate variability in N. America: ‘If anything, N. American flooding tends to become both less frequent and less severe when the planet warms…on average, we would expect that any further warming of the globe would tend to further reduce both the frequency and severity of flooding in N. America, which, of course, is just the opposite of what the world’s climate alarmists continue to claim would occur’

Which of the below worst floods on record were caused by carbon dioxide?