Breaking: NOAA, NASA quietly conceded: 2014 was probably not the warmest year on record

It is more likely than not that the warmest year was a different one than 2014. 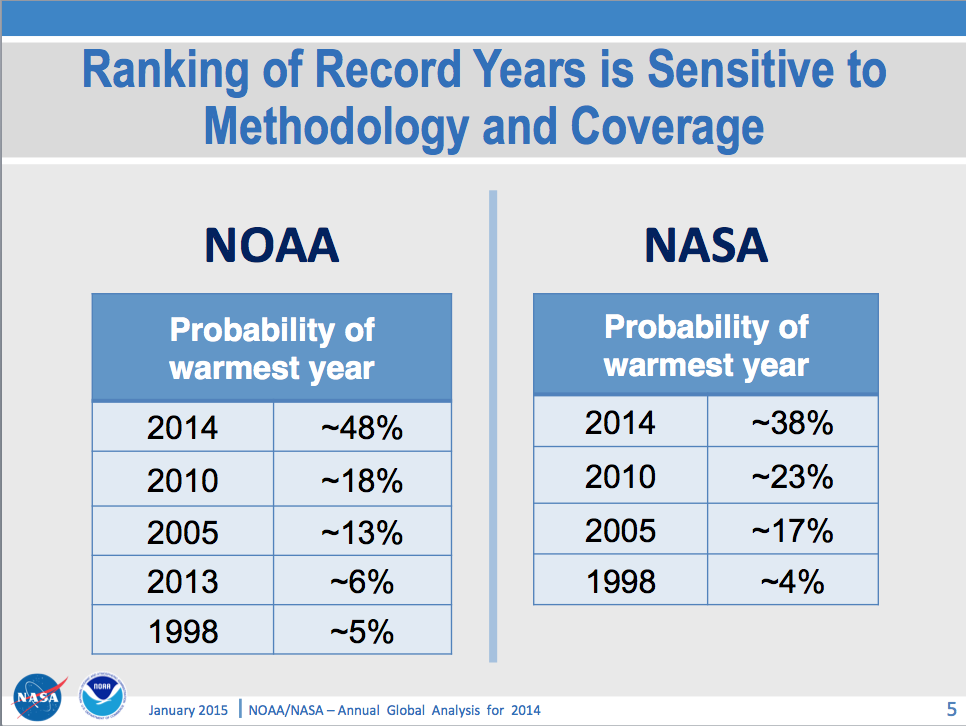 'As the tweet unambiguously proves, NASA's Gavin Schmidt knew about this fact. That didn't prevent them from pushing virtually all mainstream media to publish the lie – in the very title – that:
NASA: 2014 was the warmest year'

NOAA, NASA: 2014 was probably not the warmest year on our record

NOAA, NASA: 2014 was probably not the warmest year on our record
A direct proof that the professional alarmists are intentionally lying

As I discussed in detail, the surface temperature record significantly disagrees with the satellite datasets when it comes to the question whether 2014 was a warmest or near-warmest year.

Satellites answer this question with a clear “No”: 1998 was 0.3 °C warmer than 2014. This difference (decrease of temperature) is rather safely greater than their error margin which allows you to say that the global mean temperature as defined and calculated via the RSS methodology, for example, almost certainly didn’t peak in 2014. (If it did, it would be no big deal, anyway, but it did not.) The year 2014 was tied on the 6th and 7th place among the 36 according to the RSS AMSU satellite methodology, for example.

Immediately, sensible people – including several climate scientists – were telling them that this difference – 0.02 °C – is so tiny that it is easily beaten by the error margin which prevents you from acquiring any confidence while deciding which year was actually *the* warmest one.

Now, the two questions are: how much do the error margins of the NOAA, NASA temperature records matter? And if they change the answer to the question whether 2014 was the warmest one, did they know about this fact when they loudly announced that “2014 was the warmest year” or did they overlook that detail?

The answer is that the answer is heavily affected by the error margins and NASA, NOAA knew that – but were careful to get the wrong answer to the media. Here is a January 16th, 2015 tweet by Gavin Schmidt of NASA’s GISS, pretty much the most important guy in that agency. He reveals that they provided the media with fraudulent claims while he seems to be arrogant towards a person who just asked (“@DavidRoseUK Were you on the press call? The uncertainties were directly addressed.”):

When the uncertainties are taken into account, you can’t say which year was the warmest one on the two records. Instead, you may only quantify the probability – by integrating the probabilistic distributions in various ways – that one year or another year was the warmest one. And both NASA, NOAA did this exercise for us – in fact, before they spoke to the media! If you were one of the few people in the world who attended a press conference, you could have heard a “footnote”. But no participant did notice that footnote, partially because most journalists are either dishonest or stupid.

As the tweet unambiguously proves, Gavin Schmidt knew about this fact. That didn’t prevent them from pushing virtually all mainstream media to publish the lie – in the very title – that
NASA: 2014 was the warmest year
Sorry, but even your own work shows that this probably wasn’t the case and you were deliberately lying to the media – and everyone else – about the results of your work. You are doing it all the time, 24 hours a day, 7 days a week, and 52 or 53 weeks a year.

The tweet by Gavin Schmidt is a simple example of mass manipulation in action. They publish some of the correct yet inconvenient clarifications at places where almost no one reads – the press conference was attended by a small number of people, Schmidt has a few thousand Twitter followers, almost no one reads the bulk of the IPCC reports etc. – while at the places which matter because millions of people read them, they always post the distortions, oversimplifications, and downright lies.

This combination of strategies allows them to say that they “did release the truth”. However, they are careful that they only speak the truth when almost no one listens.

Hours after this blog post was published, The Daily Mail published a criticism by David Rose with pretty much the same content. It is totally plausible but not certain that he was able to make the same conclusion independently of this TRF blog post.