UN summit rejects solar power as ‘too unreliable’ – Chose ‘diesel generators’ instead! Lima ‘organizers rejected powering the [summit] with solar panels on the grounds they were too unreliable’

UK Telegraph: 'Ironically, the conference has remained overtly reliant on fossil fuels, in the form of diesel generators. The talks are taking place in a vast temporary village constructed on the site of the Peruvian military headquarters. Organisers rejected powering the village with solar panels on the grounds they were too unreliable, while efforts to hook the site up to the national grid – which is half-fed by renewable energy – failed due to technical problems. Experts say the Lima talks will have the biggest carbon footprint of any UN conference to date at more than 50,000 tons of carbon dioxide. As well as the diesel generators, the footprint has been enlarged by the jet fuel burned by the estimated 11,000 people who flew in from abroad to attend – including roughly 4,000 from non-governmental organisations – as well as the emissions from the fleet of coaches that crawl through Lima’s gridlocked streets to shuttle delegates to and from the venue.' 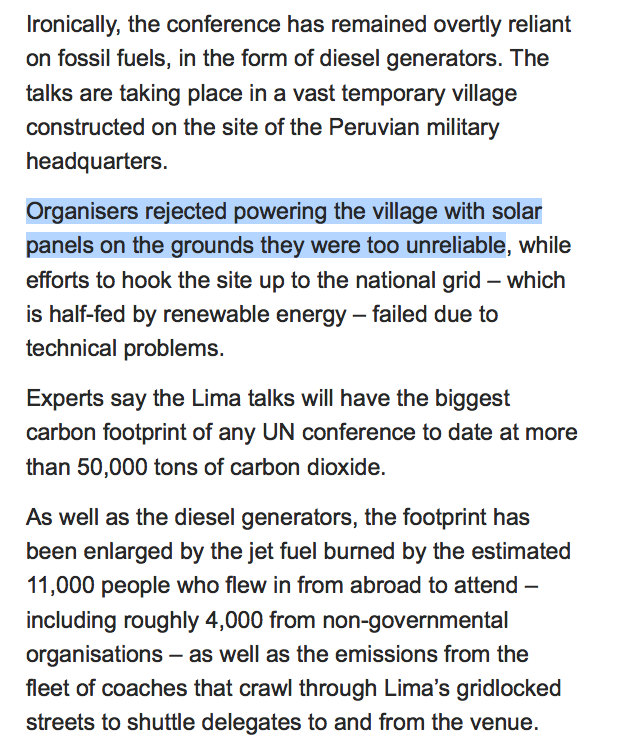 At the Rio Earth Summit in 1992 the United Nations agreed to the “stabilisation of greenhouse gas concentrations in the atmosphere at a level that would prevent dangerous anthropogenic interference with the climate system”.

The agreed science is clear: avoiding “dangerous” climate change requires warming to be kept within 2C above pre-industrial levels.

But more than two decades on, and few seem confident that this is close to being achieved. UN scientists say the world has already warmed by 0.85C and on current trends is set for 4C warming by the end of the century, as burning fossil fuels pumps carbon dioxide into the atmosphere.