Hulk Actor: Questioning Gore & DiCaprio’s carbon footprint ‘defies the spirit’ of the climate march – ‘That is a question you shouldn’t be asking here today’

Hulk Actor Mark Ruffalo - Don't make me angry: 'Anyone who attacks Leonardo DiCaprio is either a coward or an ideologue' 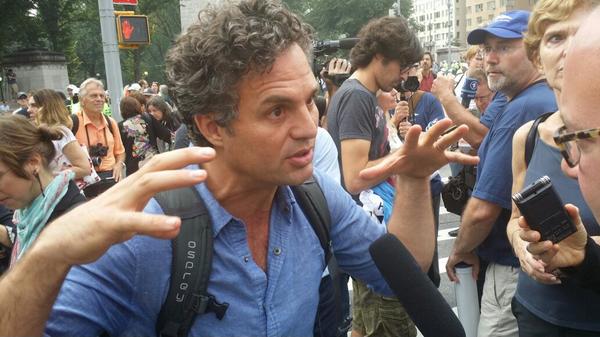 During the media availability press event, Ruffalo was asked in a one-on-one interview with Climate Depot if celebrities like Leonardo DiCaprio, who boasts that he will fly around the world to fight global warming and former VP Al Gore,  are the best spokesmen for global warming given their huge carbon footprints. (See: Leo DiCaprio: ‘The Argument Is Over. Climate Change Is Happening Now’)

“Oh brother. That is a question you shouldn’t be asking here today because that defies the spirit of what this is about,” Ruffalo told Climate Depot. The interview was conducted for the upcoming climate documentary Climate Hustle.

Ruffalo starred in the Hulk film series and has been a climate activist. See: Hulk Actor Mark Ruffalo Claims Oil Causes Typhoons: ‘What happened in the Philippines must be stopped. Fossil fuels are enemy #1 to mankind’ & Warmist Actor Mark Ruffalo: ‘We demand that the President & Congress act against Climate Change as they have acted against Saddam Husein, Bin Laden, and Hitler for that matter’

“That is a kind of a mental Jujutsu — that question. The fact of the matter is why — if they did not have any power, why are they attacking people like Leonardo DiCaprio?”

An agitated Ruffalo continued: “The fact of the matter is Leonardo DiCaprio’s voice carries farther than anyone one of those politicians,  even the President. And that is significant and he knows he has a responsibility to the people in the world to get this message out because he feels in his heart it is right.”

“Anyone who attacks Leonardo DiCaprio is either a coward or an ideologue,” he added. [Note: Audio/Video available of Ruffalo’s interview]

DiCaprio has been criticizied for his oversized lifestlye.

Leonardo DiCaprio: ‘I will fly around the world doing good for the environment’

But just before they walked on stage, the Oscar ceremony was touting the greening of the ceremony and how ordinary Americans can lower their impact on the planet and global warming.

Columnist Charles Krauthammer writing in Time Mag (On March 16, 2007) said his personal favorite was:   “Ride mass transit.” On screen text or VO – “This to a conclave of Hollywood plutocrats who have not seen the inside of a subway since the moon landing and for whom mass transit means a stretch limo seating no fewer than 10.”

(Cimate Depot asks: Ride mass transit? This brings up an obvious question, when was the last time Gore or DiCaprio rode a city bus?)

‘DiCaprio and climate scientists argue that coal, natural gas and other carbon-based forms of energy are a “monster” that has created catastrophic surges in the earth’s surface temperature. In response, some lawmakers around the world are tinkering with ways to make carbon more expensive, and sustainable forms of energy — such as wind power — cheap.’

DiCaprio in new video: ‘We must put a price on carbon’ – The first film in the series, titled “Carbon,” calls for more federal action to control carbon dioxide pollution. We cannot sit idly by and watch the fossil fuel industry make billions at our collective expense. We must put a price on carbon — now,” DiCaprio said in a statement. The eight-minute long film argues that a tax should be placed on carbon in order to keep global temperatures below 2 degrees Celsius.

“I actually got to meet Al Gore, who — I asked him what was the, you know, the most important environmental issue in the world, and he, without hesitation, said ‘global warming’ and literally took me, you know, like a child and wrote out a chart and explained what global warming was and how, um, basically because of, you know, carbon emissions in our atmosphere, we’re going to, you know, change our climate forever,” DiCaprio said in an interview with Charlie Rose on PBS in a 2005 interview.