Easterbrook: 'The Miller et al. paper is so badly flawed with unwarranted assumptions, poorly thought out assertions, and astonishingly bad logic that their conclusion “temperatures of the past century must have exceeded those of any century in more than 44 ka” cannot be considered valid...Even if the conclusions in the paper were correct, they wouldn’t prove anything about CO2 as the cause of climatic warming....the real purpose of the paper was to push CO2 at the expense of objective science'

Miller et al. radiocarbon dated 145 rooted tundra plants revealed by receding ice in the eastern Canadian Arctic and that it constitutes the first direct evidence that recent temperatures now exceed those of any century in the Holocene, including the Holocene Thermal Maximum. They further contend that (1) average summer temperatures of the last ~100 years were higher than any century in the past 44,000 years and suggest that present temperatures have not been exceeded in the past ~120,000 years, at or near the end of the last interglaciation, and (2) they conclude that this ‘unprecedented’ warming was caused by anthropogenic increases in greenhouse gases. So let’s look at some of the assumptions that form the basis for their conclusions and compare their conclusions to other Arctic data. 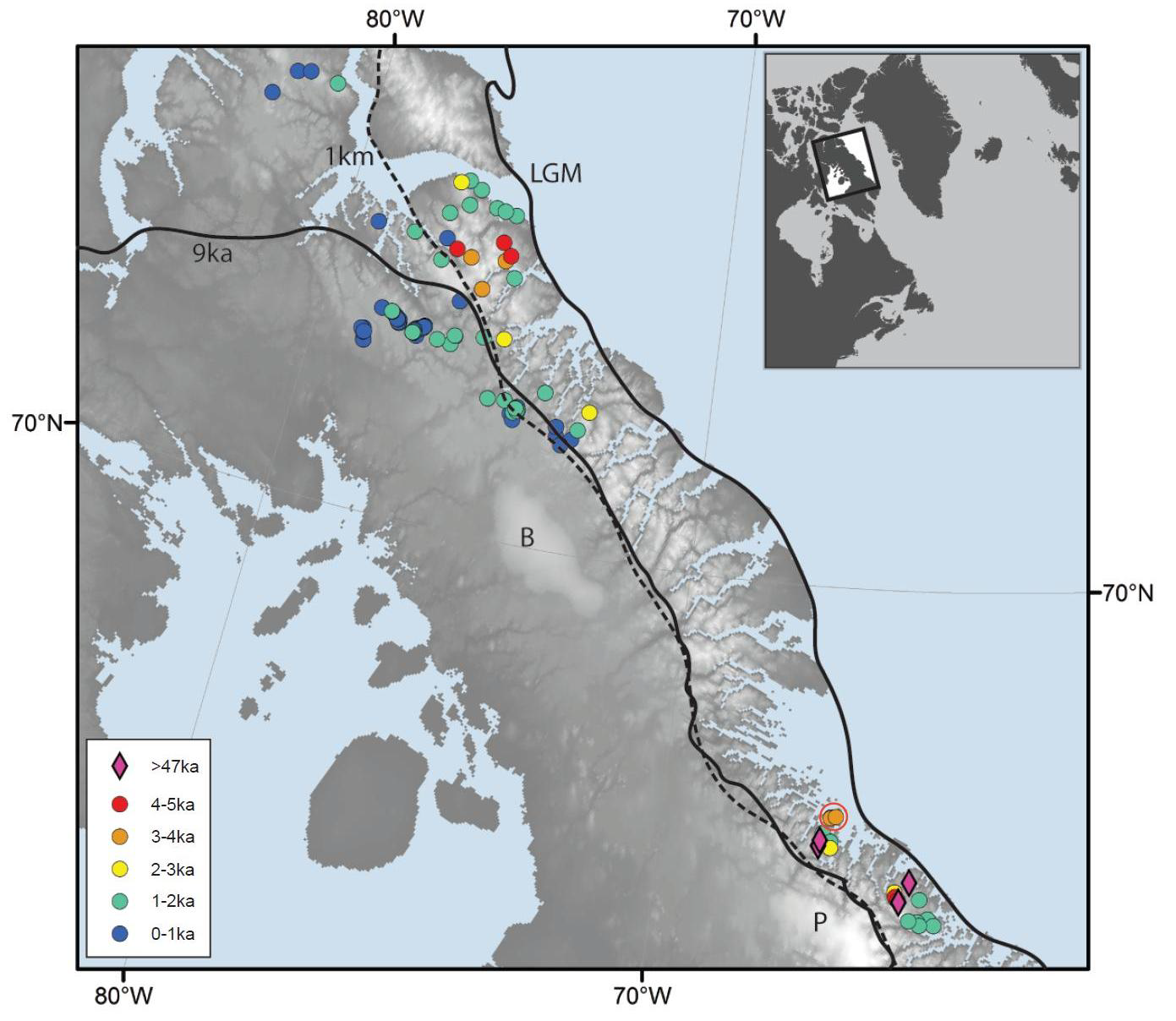 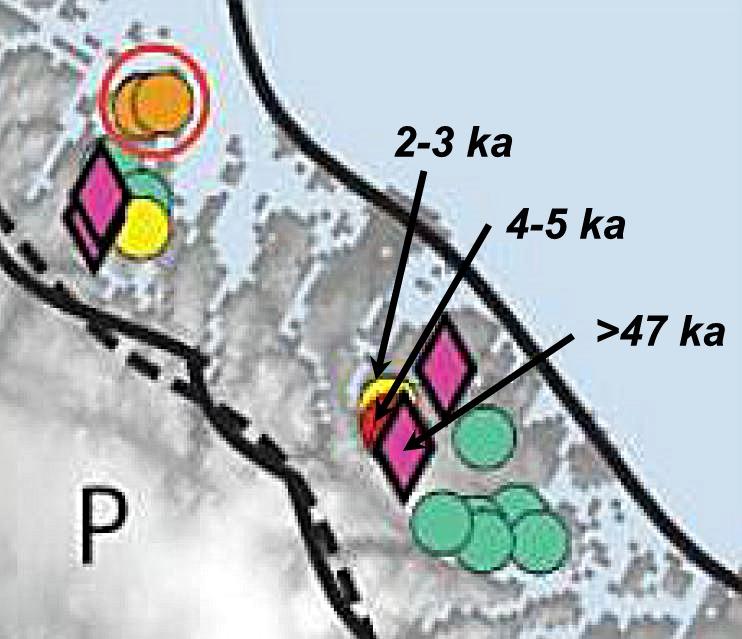 [1] Mille el al. contend that “although glaciers are frequently associated with deep and widespread erosion, small, cold-based ice caps that mantle relatively flat terrain typically advance by lateral accretion rather than by basal flow, and are thus capable of preserving even the most delicate features of the landscape. As these ice caps recede, they often reveal rooted tundra plants that were living at the time snow and ice last covered the site.”  They further contend that “Surface-elevation contours of the continental Laurentide Ice Sheet (LIS) show that all four ice caps with pre-Holocene dated plants were above the surface of the LIS at its last glacial maximum. These sites thus supported only local ice caps then as now. And, because the ice caps occupy flat summits of less than 0.2 km2 surrounded by steep slopes, ice thicknesses of more than 70 meters could not have been sustained.”

The assumptions in these statements are:

[2] Miller et al. claim that recent exposure of moss by melting ice proves that modern temperatures at the site were as high or higher than at any time since the moss was covered by ice and that therefore present temperatures have not been exceeded in 120,000 years. But is this necessarily true?  If a block of ice is placed on the floor of a room and the thermostat is turned to 90°F, the ice will begin to melt. If the thermostat is then turned down to 40°F before all of the ice has melted, ice will continue to melt until the floor is uncovered, but to conclude that the temperature had never risen above 40°F since the floor was first covered with ice would be totally false. The same is true of the Baffin ice caps—if moss is uncovered at today’s temperatures, that doesn’t mean that higher temperatures haven’t occurred previously. Thus, the Miller et al. conclusions that “temperatures of the past century must have exceeded those of any century in more than 44 ka” and “there has been no intervening century during which warmth exceeded that of the last 100 years” are illogical and badly flawed. One wonders how this bad logic got past peer review. In addition, we know from data in the Greenland GISP2 ice core that temperatures in Greenland rose more than 20°F per century at least three times in the past 15,000 years, well within the 120,000 years claimed by Miller et al. to have never been warmer than recently.

[3] Among the 145 14C dates on exposed moss in this study are10 dates ranging in age from 23,900 to 50,700 years, leading to their conclusion that temperatures today are the hottest in >50 ka and most likely in the past 120 ka. They explain the disparity between these old dates and the multitude of young Holocene dates as due to higher elevations of the older samples so the younger sites could be exposed by melting of ice while the higher, older sites remained ice covered. But as shown by their data, this really isn’t true. Figures 1 and 3 show site M10-231v as an ‘Eemian’ site with dates ranging from 23,900 to 44,300 years.  But ages at two nearby sites, M10-B226v and M10-223v, whose ages are shown as 2-3,000 and 4-5,000 years old, are higher than the site with old dates (Figure 4). 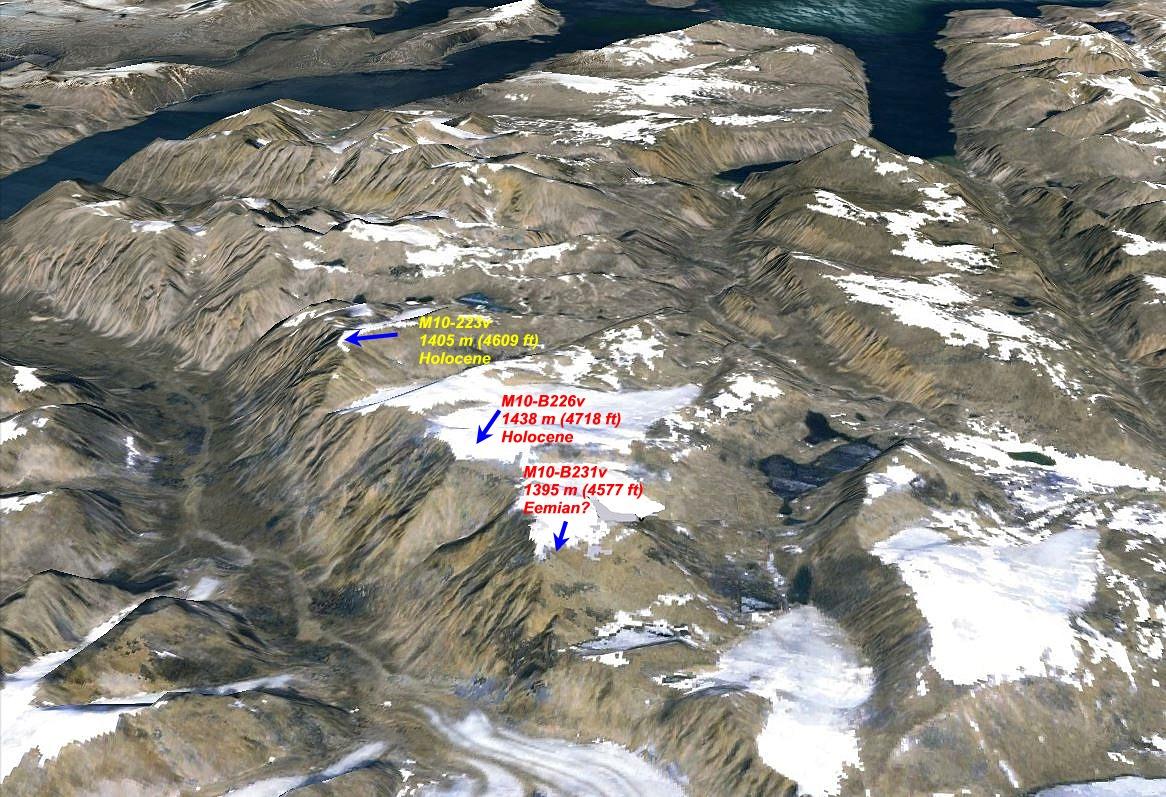 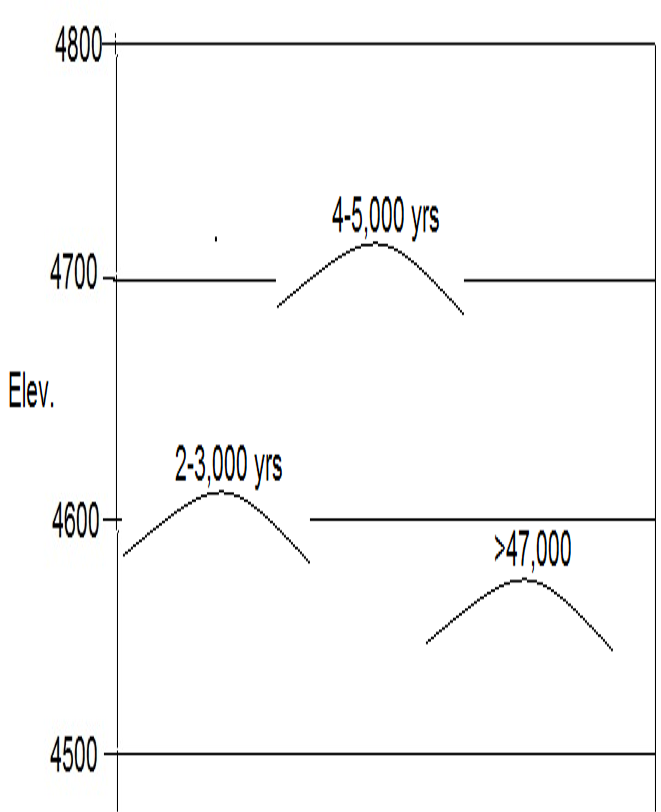 This totally destroys their argument for no temperature as warm as the present since the Eemian Interglacial. All they have shown is that melting of the ice caps on Baffin Island wasn’t complete during the Holocene and recent warming has continued the melting.

This totally destroys their argument for no temperature as warm as the present since the Eemian Interglacial. All they have shown is that melting of the ice caps on Baffin Island wasn’t complete during the Holocene and recent warming has continued the melting.

Comparison of Miller et al. conclusons with other Arctic data. 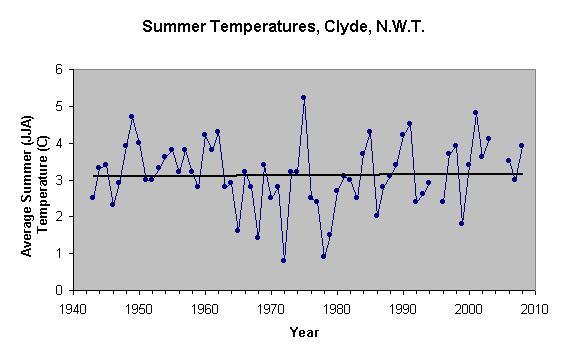 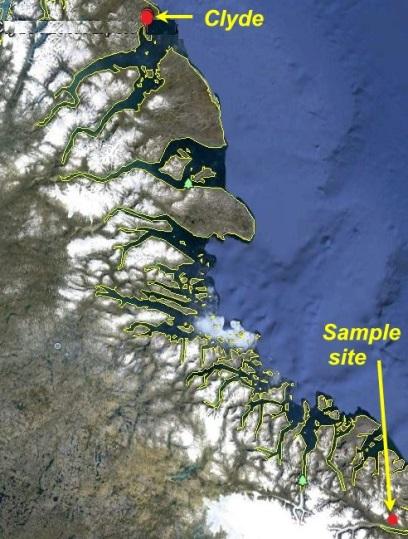 Temperature records from Greenland and other Arctic areas also show no unusual warming. Yes, temperatures have warmed and cooled, but the 1930s were consistently warmer than the more recent warming from 1978 to 1998 (Figs. 6, 7, 8, 9). 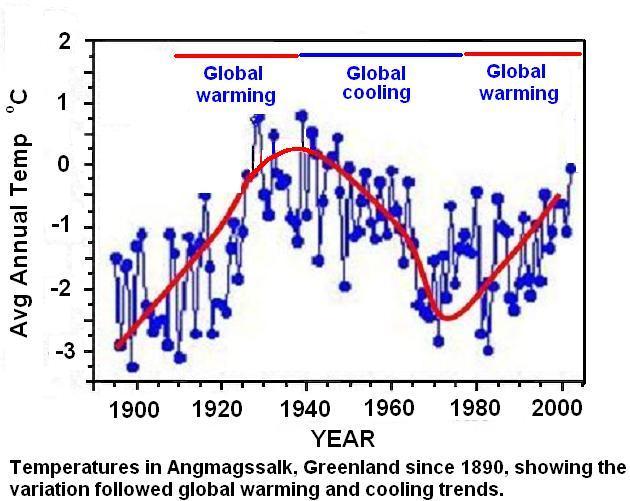 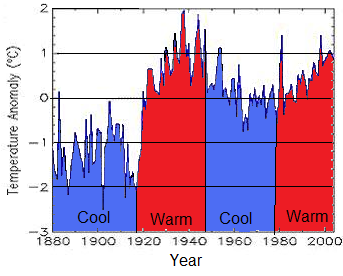 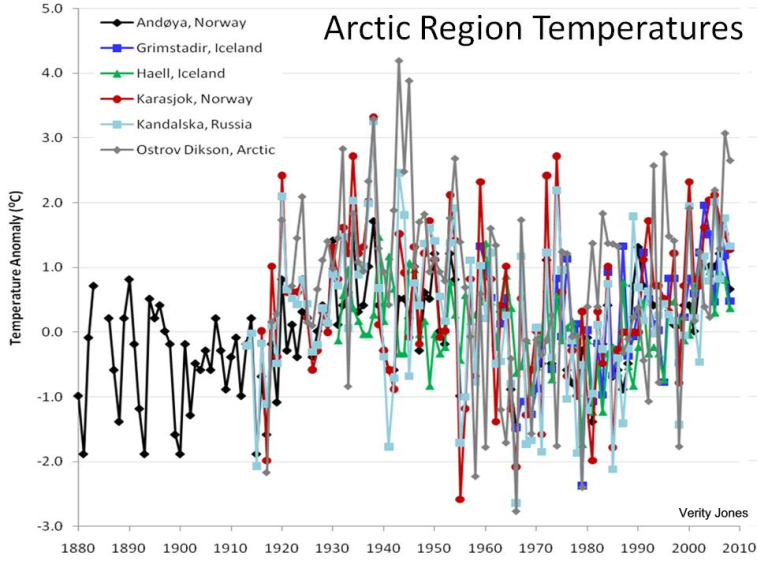 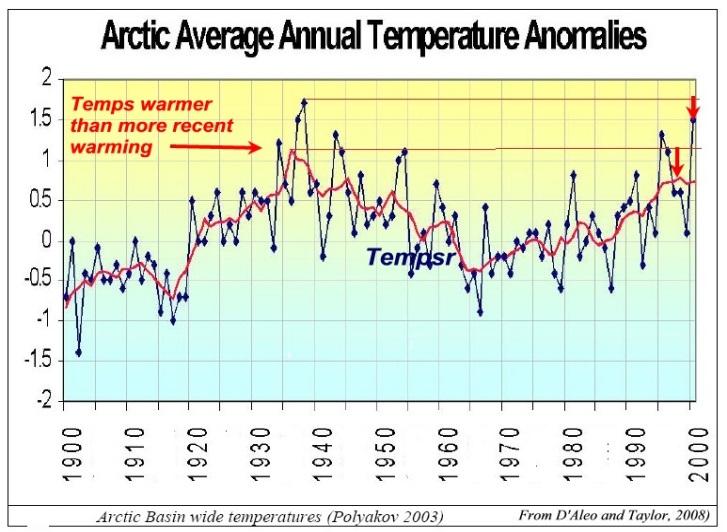 Figure 10 shows that virtually all of the period from 1500 years ago to 5000 years ago was warmer than modern temperatures. This data is directly contrary to the Miller et al. conclusion that “average summer temperatures of the last ~100 years are now higher than any century in more than 44,000 years.”

Figure 10. Temperatures during the Medieval Warm Period, the Roman Warm Period, and the rest of the time back to 5000 years ago were all warmer than the past century, directly contradicting the conclusion of Miller et al. 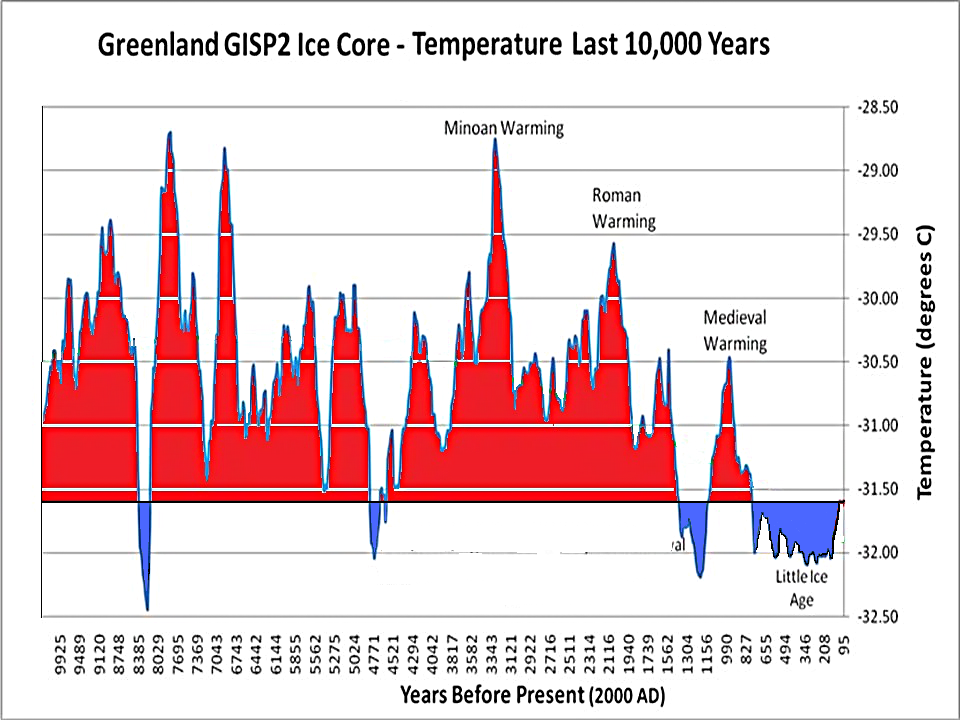 Temperatures during the late Pleistocene fluctuated dramatically, rising 20°F in a single century at least three times. These rates of warming were far greater (~20 times greater) than warming during the past century. Thus, the Miller et al. conclusions cannot be valid. 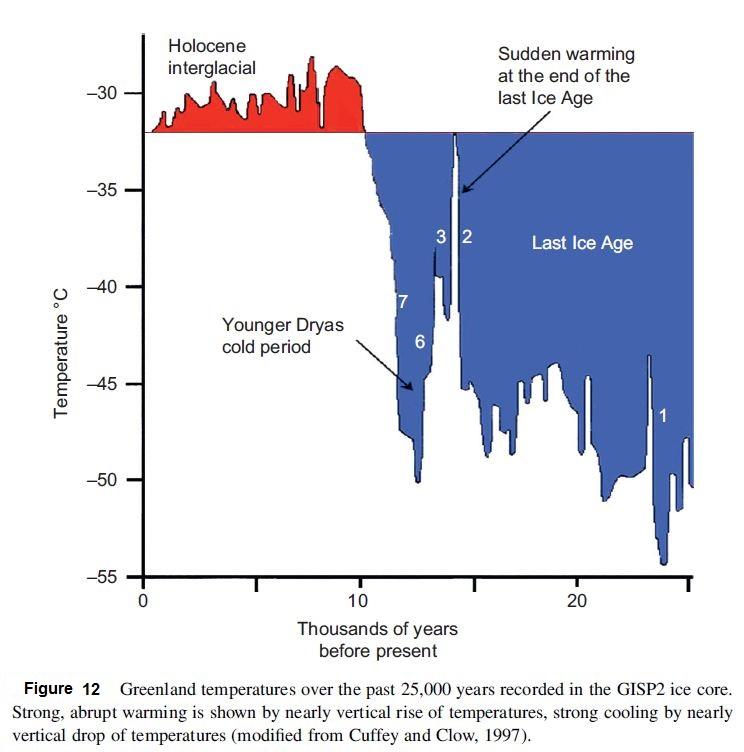 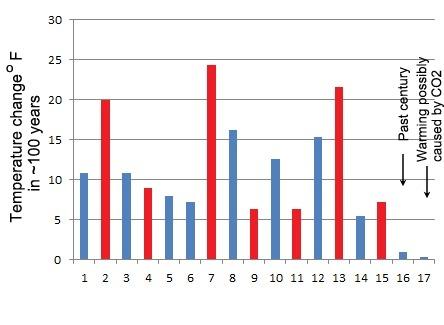 From the foregoing data and analyses, what is abundantly clear is that the Miller et al. paper is so badly flawed with unwarranted assumptions, poorly thought out assertions, and astonishingly bad logic that their conclusion “temperatures of the past century must have exceeded those of any century in more than 44 ka” cannot be considered valid. How could reputable scientists come to such incorrect conclusions?  Perhaps the last sentence in their conclusions section gives us a clue: “anthropogenic emissions of greenhouse gases have now resulted in unprecedented recent summer warmth that is well outside the range of that attributable to natural climate variability.” Even if the conclusions in the paper were correct, they wouldn’t prove anything about CO2 as the cause of climatic warming, so this statement suggests that the real purpose of the paper was to push CO2 at the expense of objective science.

Analysis: New Arctic Study Claiming Unprecedented Warmth Ignores Inconvenient Facts: ‘If junk science like this can be published, it really does seriously question the role of peer reviewers in providing any sort of independent, critical review’

More critiques of Unprecedented(?) Arctic warming: ‘The arguments laid forth in this study fall short of making a strong case for their (anthropogenic factors) dominant role’
New warmist Arctic study challenged: Prof. Jim Bouldin of UC Davis ‘marvels at how the authors could state the conclusions they do, given the methods and data presented’ – ‘We have four sites clustered together at one end of the 1000km sampling transect that give very anomalous results relative to the 135 samples collected all along that transect. So why in the world are they focusing on those four sites, to the exclusion of the much more geographically extensive 135? How can the authors just blow past this fact without discussing why in any way? Reviewers, HELLO??’